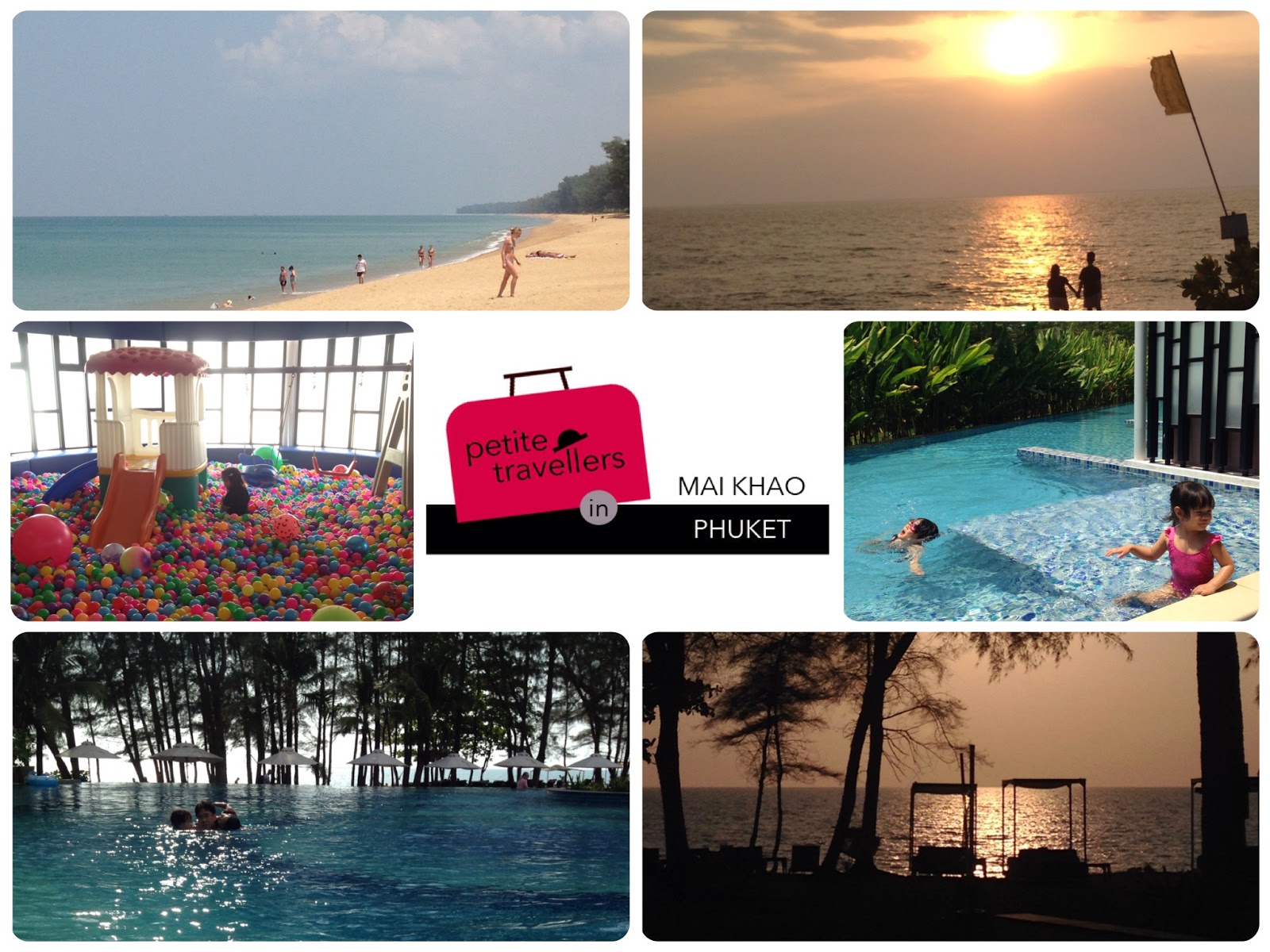 ﻿
This travel post is written by Lyn who blogs at Little Blue Bottle. She travelled to Phuket with her husband and her petite travellers, K (5 years) and B (3 years) in March 2014.

This holiday is suitable for parents with kids who just want a relaxing and comfortable beach holiday, not too far from home.

We took a quick escape to the Holiday Inn Mai Khao in Phuket, which is just a short (less than 2 hours!) plane ride away.

Here are the best things about our stay:

1. The pool access room (quiet lap pool with a private recess) was worth every cent and the girls spent hours swimming every day. 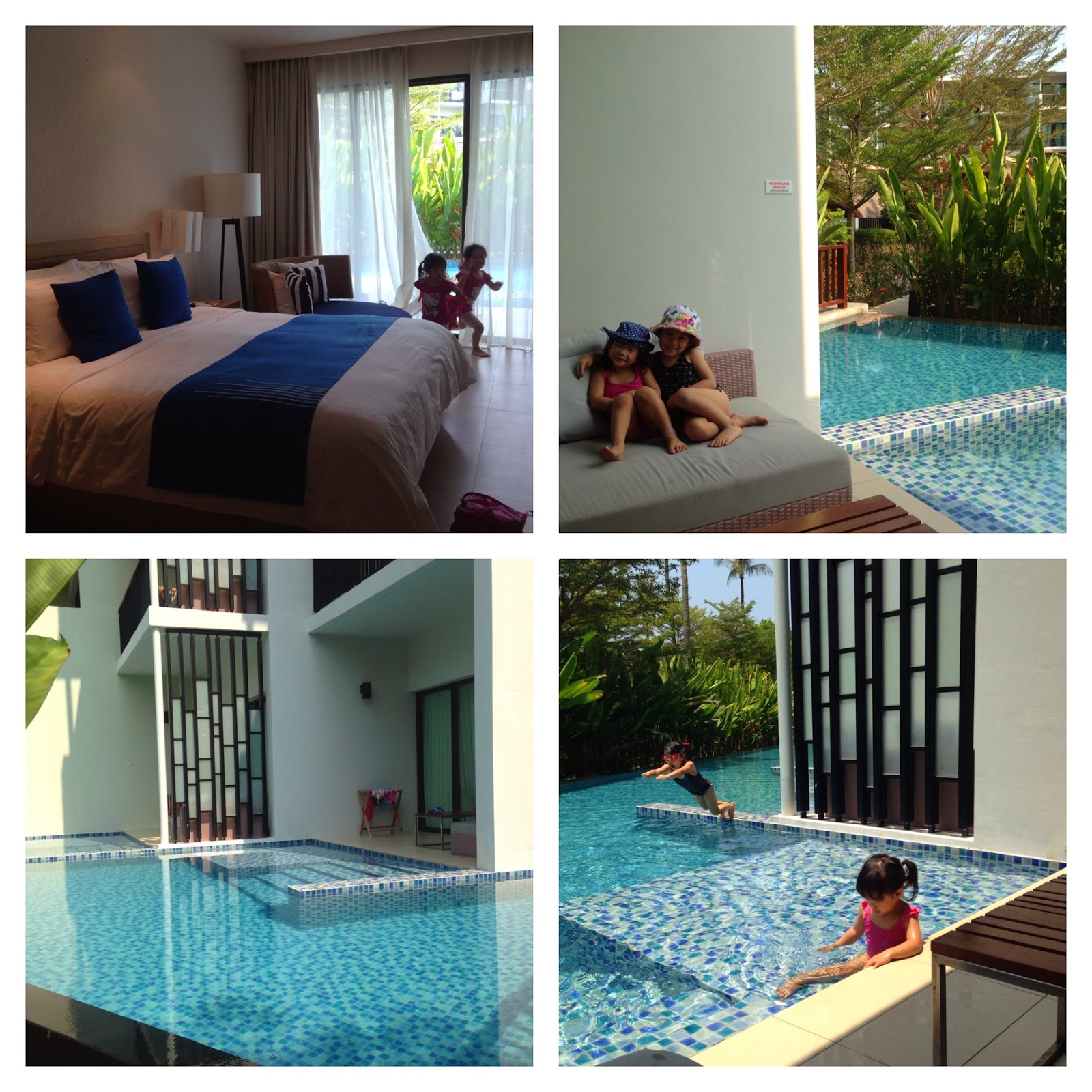 2. There was a fantastic Kids' Club that was free! The girls asked to go everyday and didn't want to leave, even at mealtimes. Which meant that the hubs and I could take turns babysitting (the three year old was too young to be dropped off) and each have some stunning alone-time. 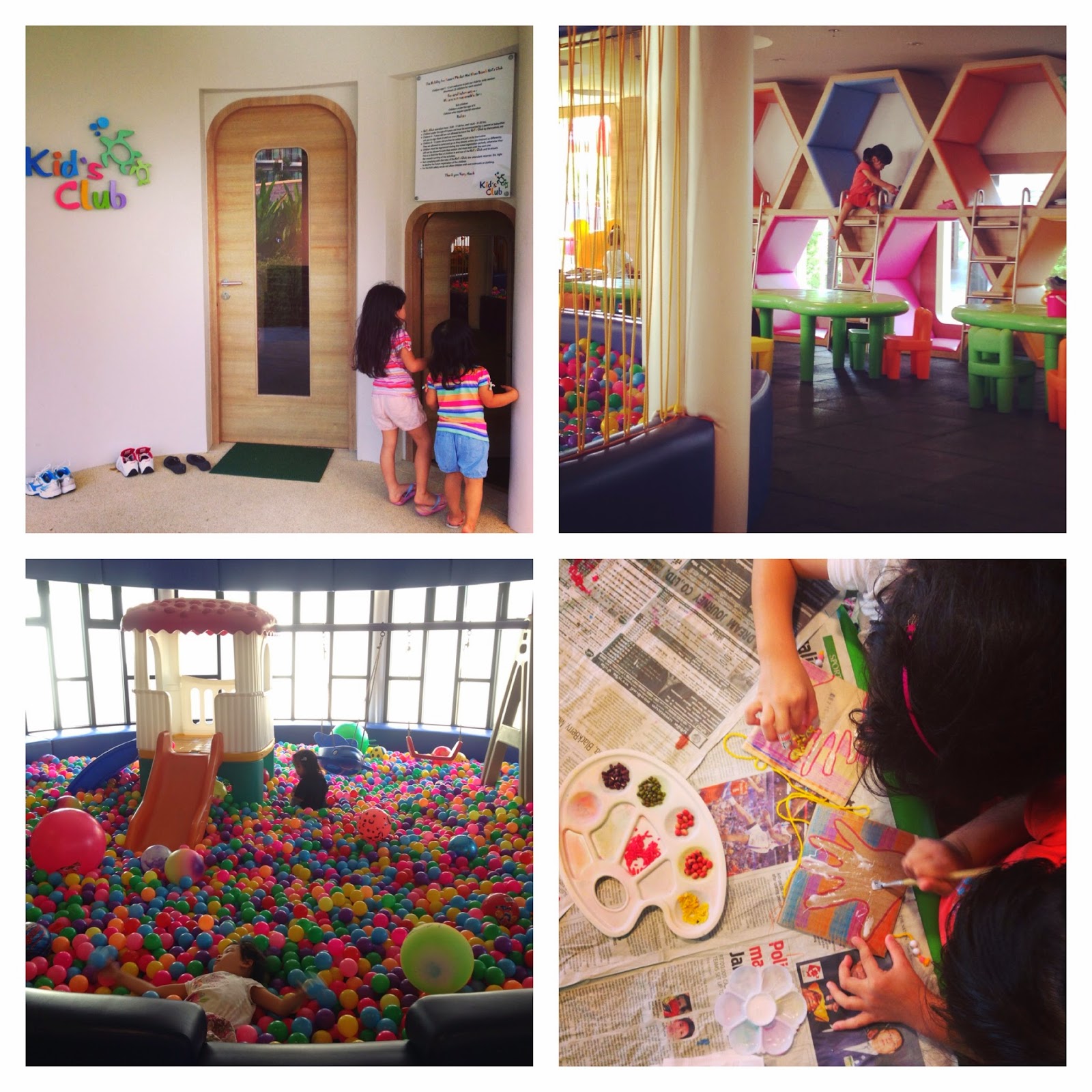 3. A clean and calm beach was a mere 10 minutes walk away from our room (read: gorgeous sunsets and sandplay!). 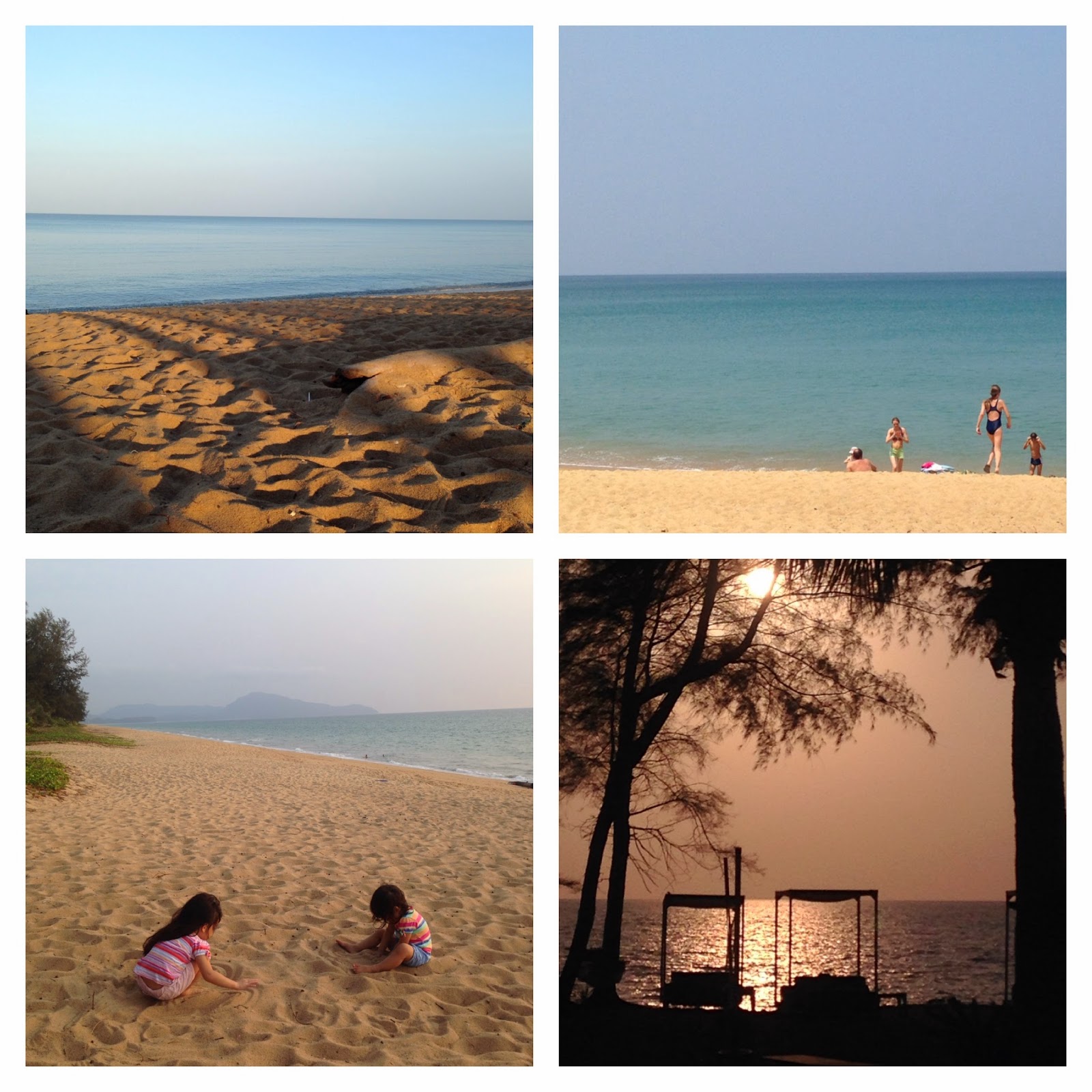 What did we do for food?

We had breakfast buffet at the hotel every morning. Whilst it was more expensive than venturing out, the spread and comfort made it worthwhile.

The breakfast venue has a lovely outdoor setting. Unfortunately, as with many other southeast asian holiday spots, it is plagued by houseflies. Annoying, but harmless (unlike mozzies). I personally don't mind houseflies, since they seem relatively clean, and though some landed once or twice on our plates no one suffered any stomach upset. But I guess coming from Singapore, we tend to have a low tolerance for what's simply part of life in most of Asia. 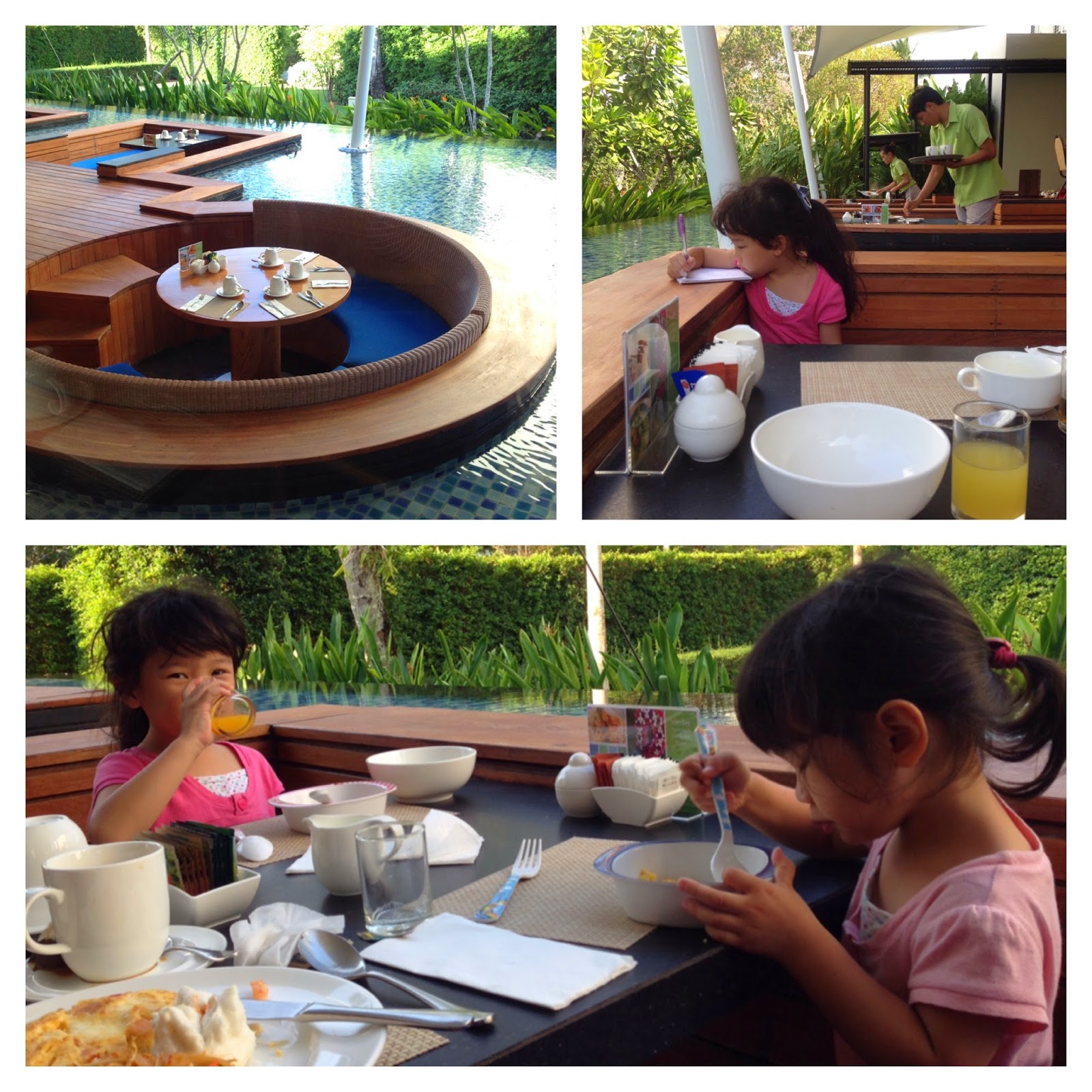 For lunch and dinner, we either ate at one of the hotel's restaurants (prices are similar to dining out in Singapore), one of the eateries near the hotel, or got takeaways from the latter. There are 3 of those within a 5 min walk of the hotel's front gate, and another one near the beach, to the right of the hotel proper. Simple dishes like Pad Thai or Fried Rice with Prawns went for SGD$4, and they were yummy. There were also seafood options. 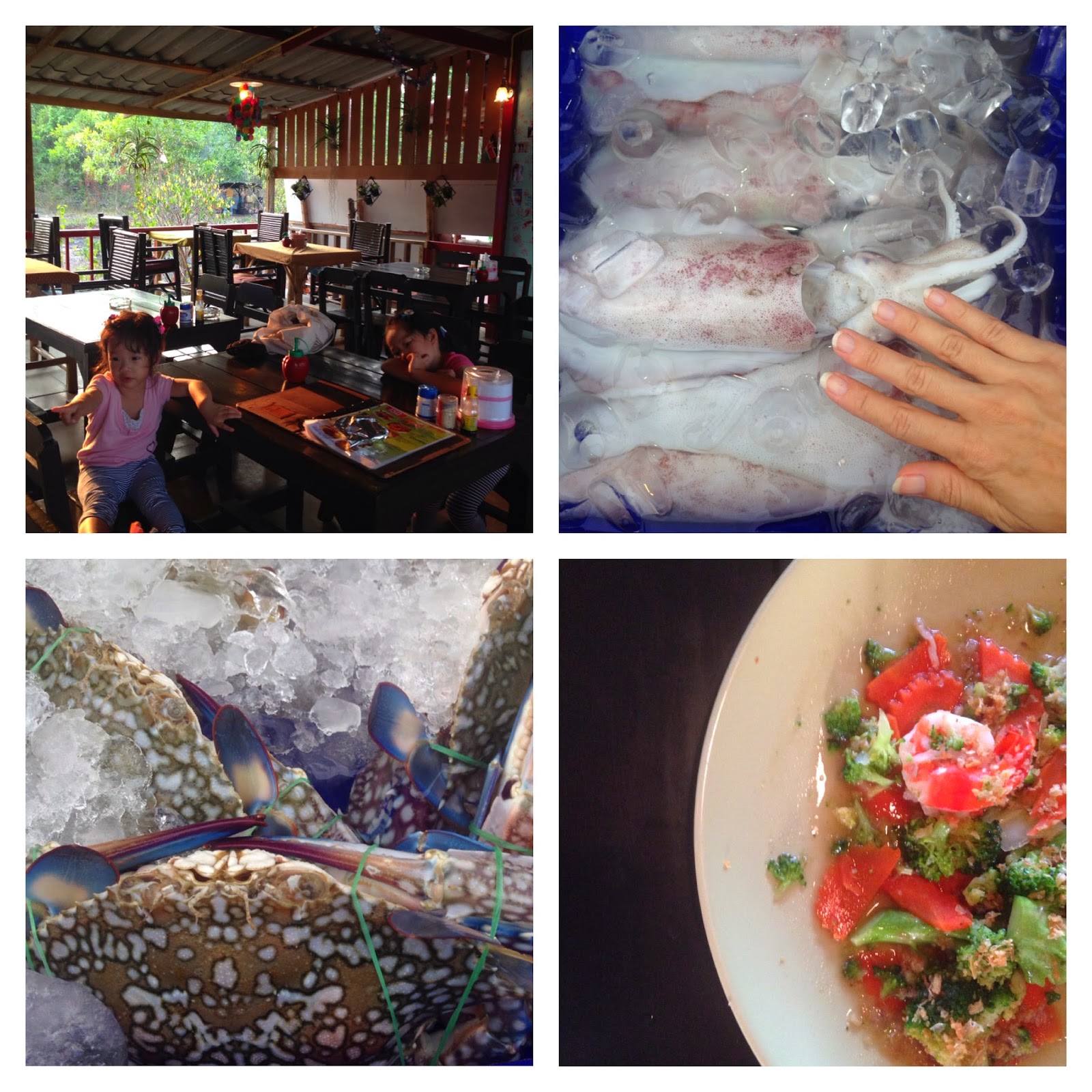 For takeaways, we either ate in the comfort of our air-conditioned room, or at a cabana as we watched the sunset. One of my favourite memories of the trip was just that, four of us, right in front of the sea, eating as the sun got redder and bigger, then lower and fainter, and finally disappearing down the horizon. Ahh... 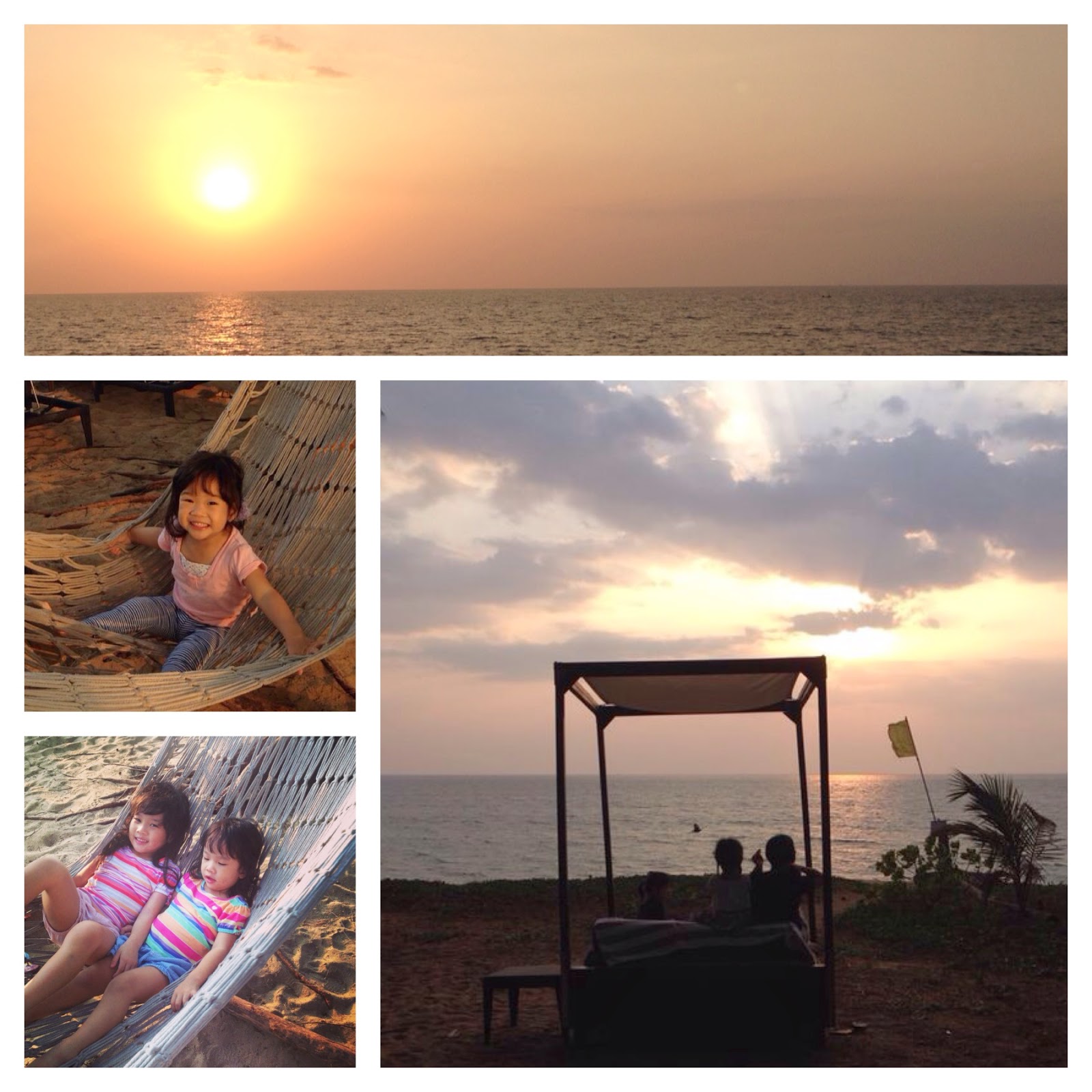 How about our favourite activities?

The girls loved the hammocks strewn around the beach, and happily swung in them.

Budget-conscious me headed straight for the 500 baht an hour massage hut next to the beach. It had no name, but I was just musing about how I'd call it the Casuarina Press - strong kneads to my aching shoulders and neck, as causarina branches swayed overhead... Add that to the sound of lapping waves, the occasional birdsong and the lilt of Thai between the masseuses in the background... bliss!

The hotel also had free outdoor popcorn and movie night screenings - there were two shows scheduled in the four nights we were there, and a huge basket filled with salty popcorn packets that you can help yourselves to.  On movie nights, a cartoon is screened at 7pm, and a grown-up movie at 830pm. There are cabanas and beanbags for folks to get comfy in.

We were a bit bothered by the mozzies and tiny tiny flies that fly in a cloud. So after half an hour each time, we'd pack our popcorn packets and head back to the air-conditioned comfort of our room.

The girls were thrilled that there were DVDs for free loan from the lobby too - we watched 4 cartoons in the comfort of our beds! 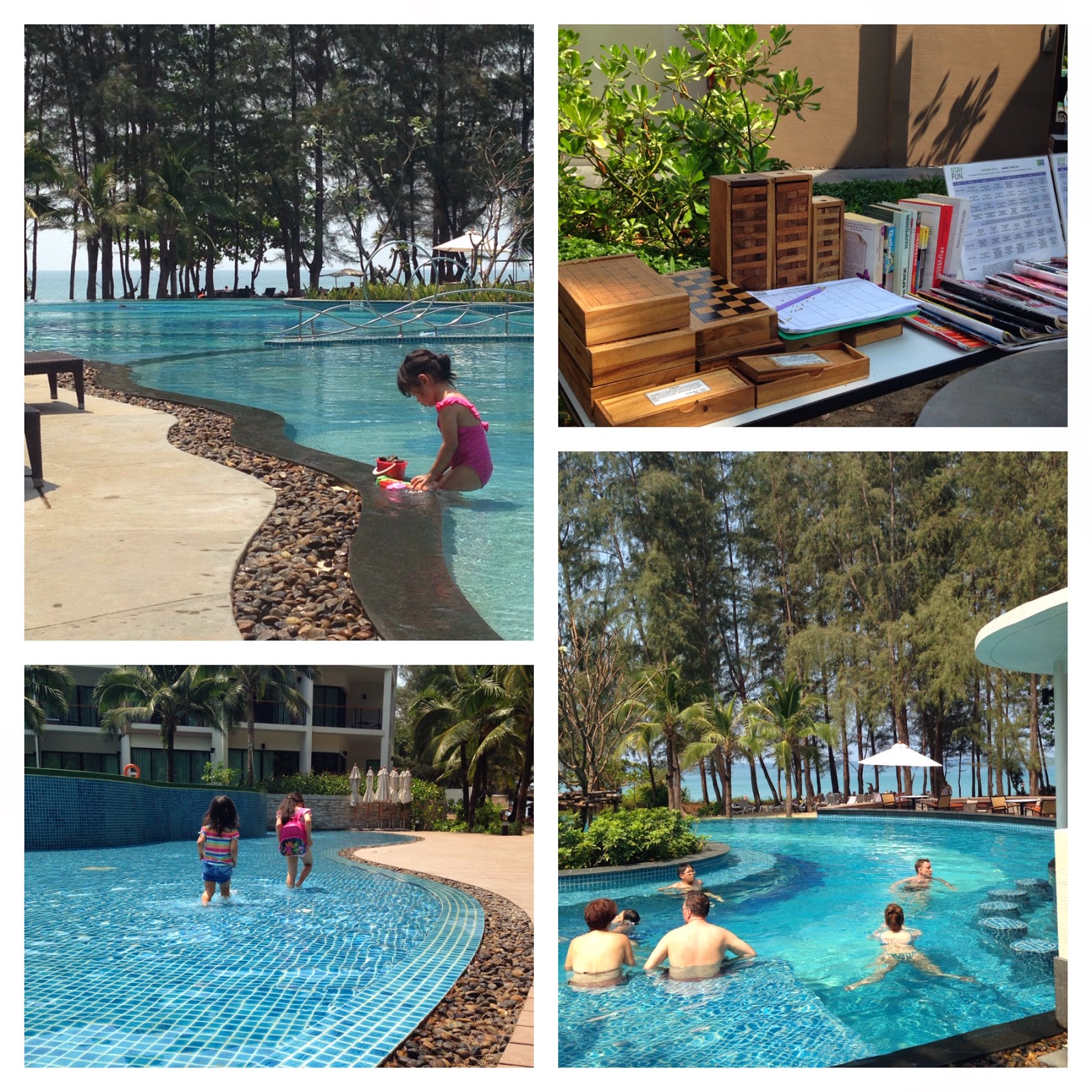 The hotel had an infinity pool and various other smaller pools adjacent to that. Our five year old totally impressed us with stamina we didn't know she had, by swimming almost 30 metres from one end to the other.

It was nice that they has a large ankle deep section that our three year old could wade in, and potter about with her sand bucket in.

Fluffy large pool towels were in abundant supply, and you can see from the photo above that they even had a table full of games and books that you can borrow. 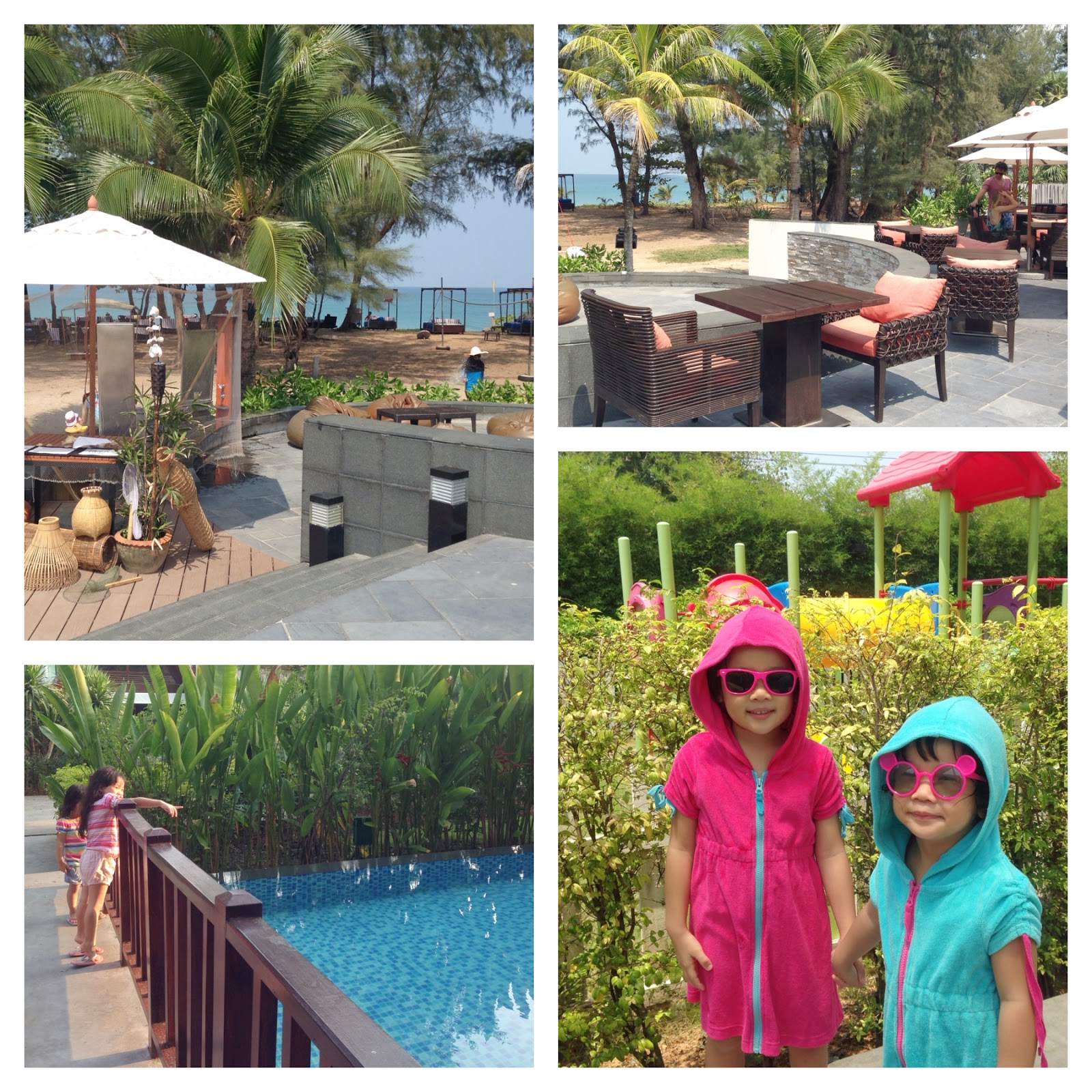 We had pizza and kids meals at the Italian restaurant right at the edge of the beach.  There was so much to do that the girls didn't even have time to explore the playground! (We only stopped to take a photo in front of it!)

Ahh... It was a truly enjoyable break from work and school for all of us. So near and accessible, relatively cheap, with yummy food.

The worst part of our trip I must say, was Thai immigration! I know we are thoroughly spolit by our airport and our immigration officers' efficiency, but the chaos entering and exiting the Phuket airport was no joke.

Even infants (we saw quite a number) did not get priority and had to suffer the hour long queues. So be forewarned.

We saw some kids from an international school busying themselves with colouring and other activities alongside the queue, so we let our kids do the same. Activity books are lifesavers!

So, that's a wrap for our Phuket beach holiday at the Holiday Inn Mai Khao. We thoroughly recommend it! Although we were initially concerned that its more secluded location meant that we were far away from the usual night markets and shopping centres, there was enough to do in the resort itself that we didn't even use their shuttles (fee required) to venture out. If we were to visit again, we'd definitely go to Mai Khao rather than the usual crowded Patong area. :)