Harvey and Bunbury: Farm stay and dolphin watch near Perth

This post is written by Lyn who blogs at Little Blue Bottle. She travelled to Harvey and Bunbury with her petite travellers K (5 years old) and B (2.5 years old). 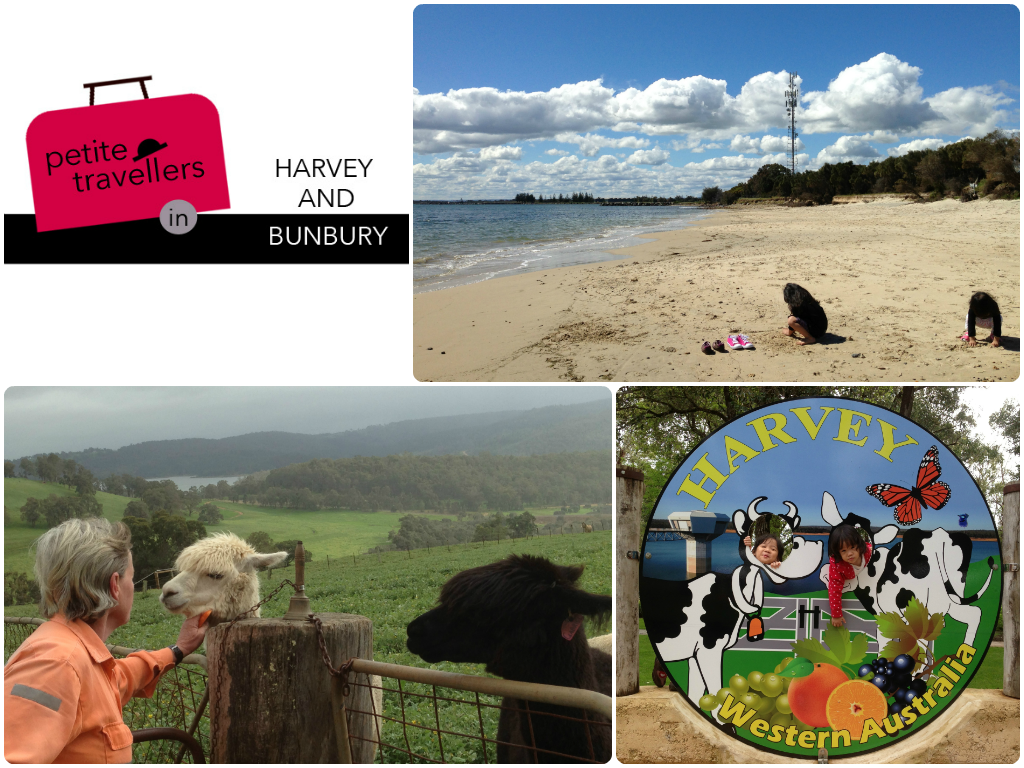 We were visiting good friends in Perth for more than a week, and decided to venture out just by ourselves, for a few days.

We thought a farmstay might be fun for the kids, and thus explored a few options. We eventually decided on Harvey Hills Farm Stay. What got me totally sold was the view of the Harvey Hills and Dam that it had, which looked spectacular even from a website photo.


The second great thing was that it was a comfortable 90 minute drive from Perth City, which is a pretty major factor when you're travelling with little ones and don't want them to have a meltdown from having to endure long distances cooped up in a car. Even with scheduled rest stops, we felt that a 4-5 hour drive would be too long for a two year old and a four year old.


We had fun feeding the timid rabbits, fowls and such. The sharp pecks of beaks on hand, the drill-like throb of a rubbery duck beak... Quite an experience for us city folk! We were also allowed to collect whatever eggs that had been freshly laid, and we promptly fried the eggs for breakfast, heh. And truly farm-fresh they were.

There were also two peacocks strutting magnificently on the grounds. They really did look regal, both in terms of 'dress' and gait.


The sheep came slowly as the farmers called, to eat carrots from our hands. Next, the farmers whistled to the horses and they came finally came galloping near. The farmers know the sheep, horses, alpacas all by name!

Alpacas are native to South America but are increasingly being farmed in Australia for wool and... meat. Gulp.


The kids had great fun on this one as we rumbled along... A great way to experience the vast expanse of the farm's green fields.

We stayed in a chalet that was fully self-contained, which meant that it had a stove, pots, pans, cooking utensils, crockery, cutlery and even alumininum foil (for BBQ if you so wished to use the grill on the patio). The furnishings were simple but comfortable. There was even a small sofa and flat screen tv.

I really appreciated the fact that they had a thick rack of books, including children's books by wonderful Australian author Mem Fox! 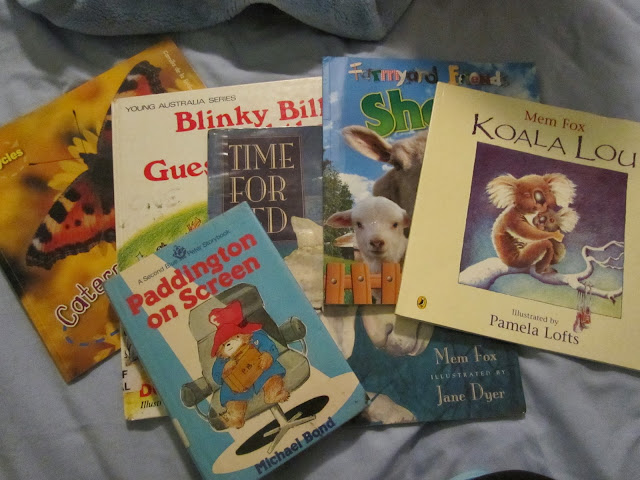 One of the best things about this farmstay's location is that it feels totally remote, but is actually only 7 mins drive to Harvey's town centre with all its conveniences.

We actually had problems finding it initially, because it was actually a 5 km drive off the road that its address states.  The long winding drive into the farm is scenic in itself, as if we have passed through the looking glass, and entered another world.

In our time there, we felt tucked away far from the madding crowd, in this little rustic farm-stay, seemingly nestled in the middle of nowhere.

Initially, we weren't quite sure if there'd be much to do in the surrounds of the farm, but we soon discovered that the little town of Harvey was a hive of activity when it comes to fresh produce.

I would highly recommend stopping first at their quaint little Visitors Centre, which is located along the Highway with signs indicating its location. You can get a very helpful free map, and directions to the various factories to visit, all located a stone's throw away from each other by car.


The Visitors' Centre was located next to the Stirling Cottage, where children's author May Gibbs (creator of Snugglepot and Cuddlepie) lived circa 1885.

We went to explore the cheese factory, which was more akin to a large cafe, selling freshly made cheese, albeit with a small viewing gallery. We had a great time tasting cheese and bought a few to share with our hosts back in Perth.

Next, we drove to the nearby home of Harvey Orange, which was also home to the Big Orange, a 3-storey high viewing tower.

Harvey Beef and Harvey Fresh Milk were not open to visitors, but we popped by the very friendly local butcher (who knows many Singaporeans, it turns out) and bought a kg of beef and a rack of lamb. Yums!

We loved the picturesque Harvey Dam too, which was right opposite our farm stay. We strolled around at dusk, quite alone. The peace of sky, water and forest, undisturbed. It was good to soak it all in. 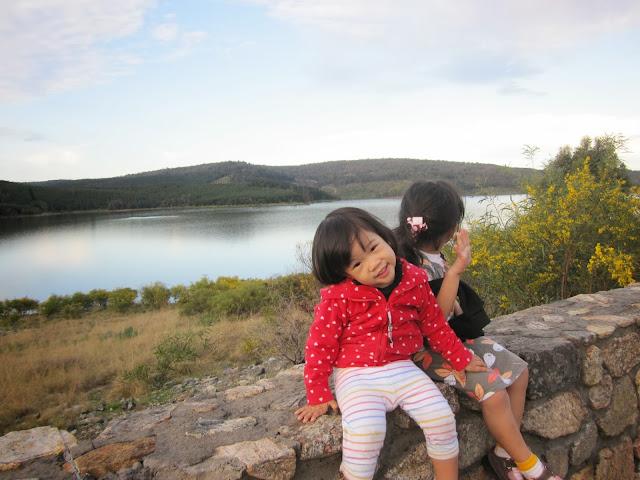 One of the most memorable events on our trip was our close encounter with wild dolphins. We drove 2 hours south of Perth city to the town of Bunbury, where 500 dolphins call Koombana Bay home.

An unassuming little centre called the Dolphin Discovery Centre, is situated right next to the beach facing the Indian Ocean. A few times a week, dolphins swim near the shore to playfully interact with visitors! 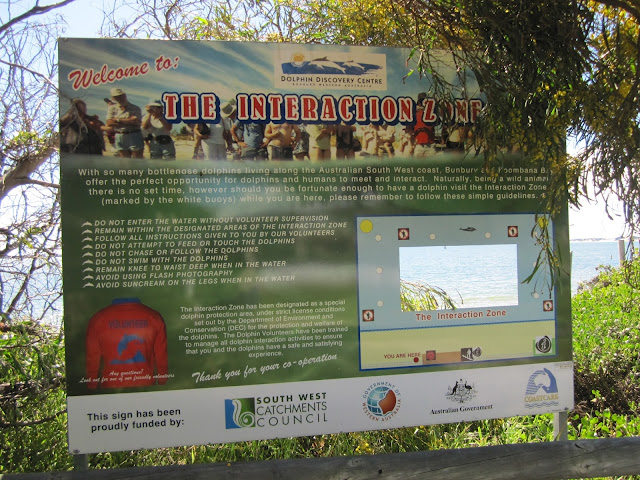 
We don’t clearly understand why the dolphins continue to visit the Zone today however research does suggest that the small amount of food they receive as a reward for their visit is not the only attraction. There are many dolphins that visit the Zone regularly that do not receive any fish and many of them stay for extended periods of time for interaction with the human visitors. Sick and injured dolphins also treat the beach as a haven, with some repeatedly visiting during periods of illness or injury.

We weren't sure if they'd come on the one day we had to visit Bunbury. So we explored the inside of the centre for a while, and suddenly we sensed some activity, and the hubs told the volunteer guide, "I think I see some dolphins in the distance". And there they were, four to five dolphins, frolicking right before our eyes, as we hurried down to the water's edge. It was enchanting. 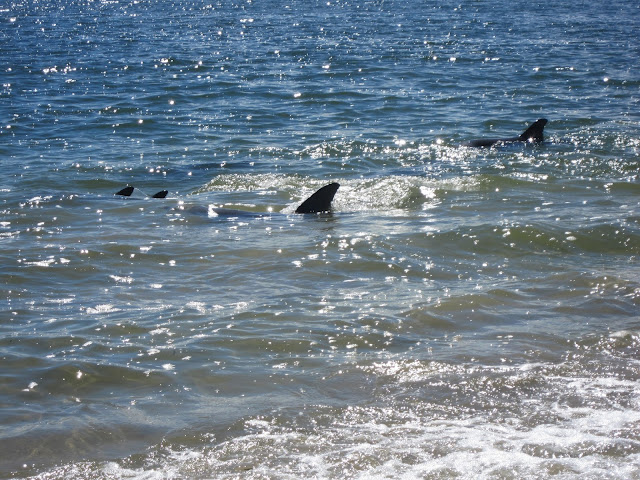 They swam so extremely close to shore. Initially, there appeared to be some tussling between the one male dolphin and 4 other females that came near that day, so the volunteers told us to stand back. Thereafter when they calmed down a little, we formed a line and waded out to them! 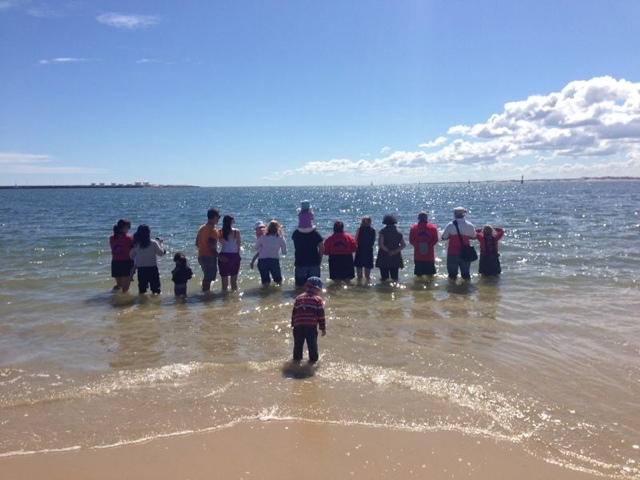 It was a magical experience. To witness a completely wild dolphin swim directly towards a line of humans, playfully going back and forth, as if it were basking in all the admiration...

I used to think that the brouhaha about captive dolphins was much ado about nothing, but after seeing them in the wild, it just made me realise how much more meaningful it was to interact with them up close without keeping them in a small tank.

I suppose it is only then, that they can lead the lives that they were made for - our guide said that the females are always either pregnant or having a calf swim alongside. Gestation takes a full 12 months, and they only mate from Jan-Feb, interestingly. Murdoch University has a research cabin next to the centre and students are currently studying population genetics via collecting the dolphins' DNA, by pinging a little biopsy dart at them. 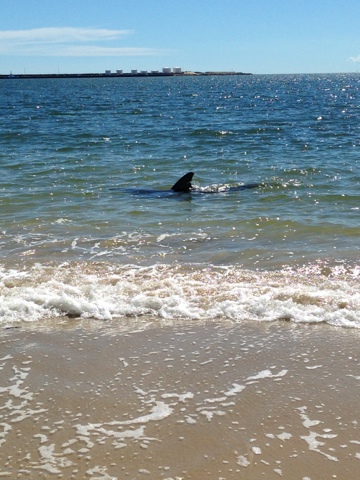 After the dolphins swam off, the girls busied themselves in the sand. It was such a lovely day. Such a perfect mingling of elements, the warm Australian sun, bright blue sky, glittering water and fantastic breeze... I could have stayed there for hours...

The centre also conducts boat trips out, and excursions where folks can swim with the dolphins. However, that is more costly, ranging from $49 to $149 respectively for adults. In contrast, all we saw cost only the price of admission, which is $10 per adult, and $5 for kids above 4. Eminently reasonable, I felt! 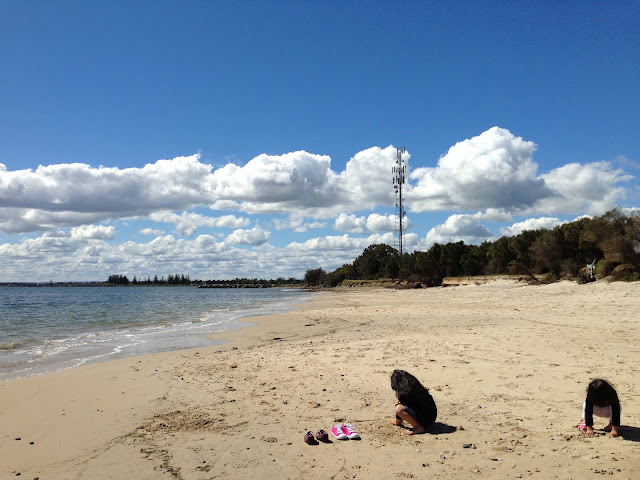 We also enjoyed ourselves walking around the small aquarium tanks indoors, getting acquainted with Eli the long Moray eel who decided to swim out and display his full 1m length, two octopi, two crayfish and an interesting large rock pool with so many starfish (more accurately known as Sea Stars). 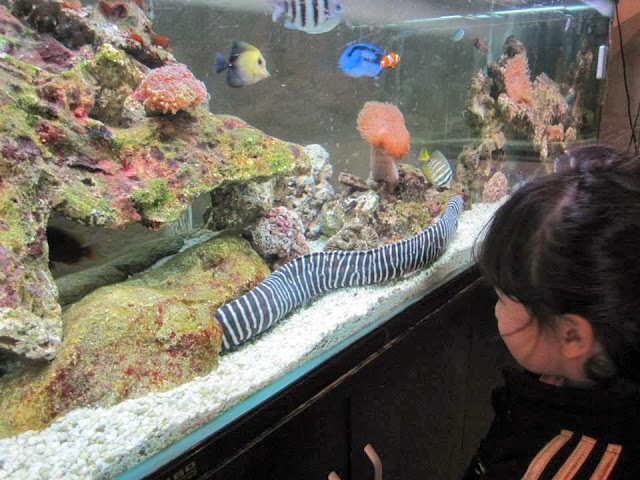 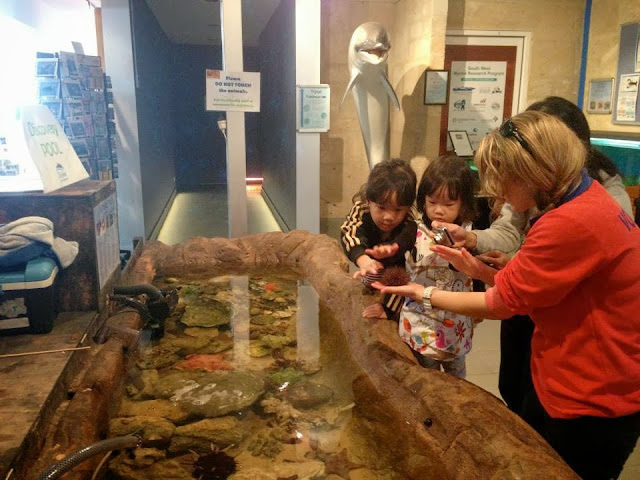 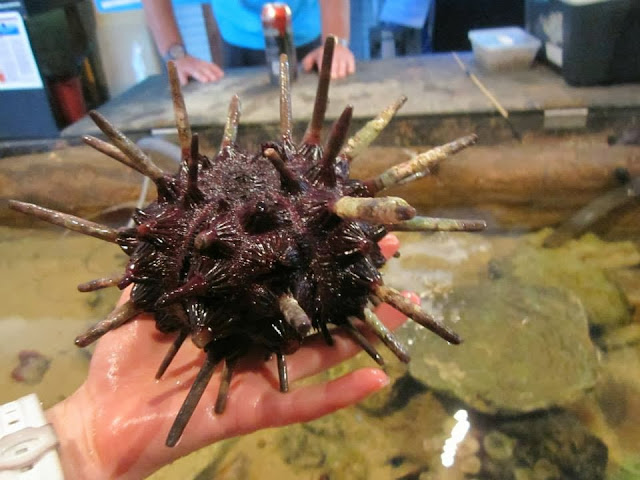 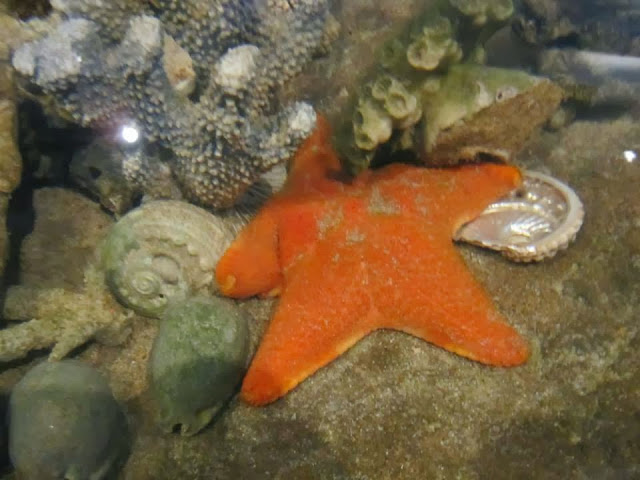 We watched a short 3D dolphin show, and two IMAX style videos. The discovery centre is not swanky now, but has its unique homey charm. Which is why I felt a tad sad when our guide mentioned that there are plans to refurbish the centre in 2 years to one that was much bigger, better, shinier.

I hope the feel remains warm and cosy, which might still be possible given the passionate volunteers that the centre is so blessed to have. After all, it's the software that gives a place its character, regardless of how large and shiny.


This was definitely the highlight of our little trip out of Perth City. Highly recommended to all.

Day 1
- Depart Perth in the morning, drive towards Bunbury
- Visit Dolphin Discovery Centre in morning
- Have lunch in Bunbury, then drive towards Harvey to check into Harvey Hills Farm Stay
- Visit Harvey Dam


Overall, we were pleasantly surprised that there was so much to do for our little family within 2 hours drive of Perth city. The activities might be more suited to those with little kids (as opposed to upper primary or teenage kids), but the entire experience truly exceeded our expectations. :)