This travel post is written by Delphine who blogs at Life in the Wee Hours. She travelled to Taipei with her husband and kid(s), Anya (5 years), Adam (2.5 years) & David (2 months) in March 2014. 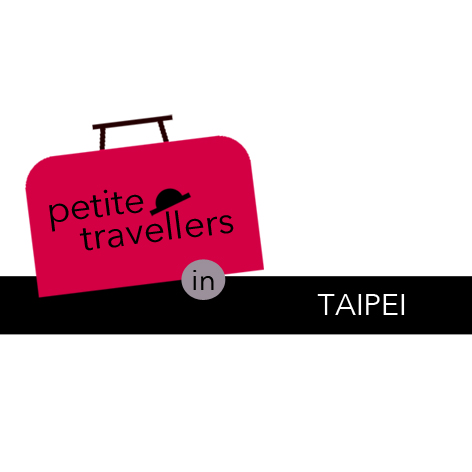 Taipei is such a perfect holiday destination for little ones. It takes less than 5 hours to fly there and there are several airlines to choose from. There's so much to see and do in Taipei. The best time to visit Taipei is in the fall between September and November. We were there in spring, which can be rainy, but we got there just as the rainy season ended and had lovely cool weather!

Before heading to Taipei, you should drop by Taiwan Visitor Association at Chevron House (30 Raffles Place, #10-01) and collect brochures and maps for the places of interest you intend to visit. If you produce evidence that you have booked your plane tickets and accommodation, you get freebies! We were given vouchers that we eventually used to buy food and local produce at the night market.

Singaporean kids are generally deprived of wide open spaces and agriculture so visiting a farm while in Taipei is a great idea. We went to Flying Cow Ranch and stayed there for one night, giving us just one full day to carry out all the activities there. We had referred to the Animal Experience Programme Timetable beforehand and were quite clear about what we wanted to do. It wasn't a rush for us at all, but if you prefer to take things easy, you may want to check in for 2 nights. 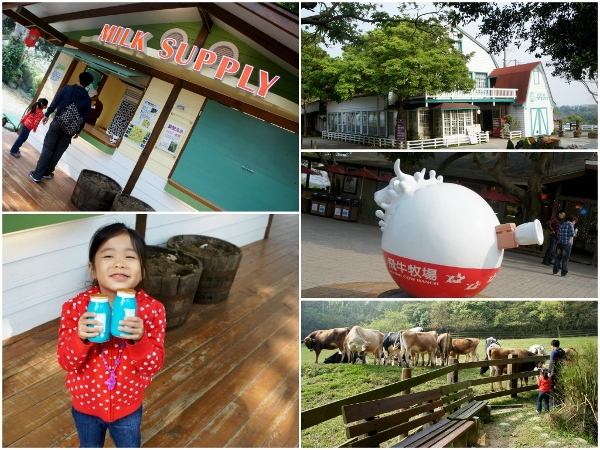 Flying Cow Ranch is a lovely place. The air is fresh, there's so much space, the food is good, the animals are well cared for, the programme is thoughtfully planned, and there are also other fun activities besides interacting with the animals.

There are several different eateries there and you can be assured that you will get to drink lots of fresh milk and eat lots of milk pudding. We had milk hot pot for dinner and I really enjoyed the steaming hot soup that was so comforting in the cool weather. 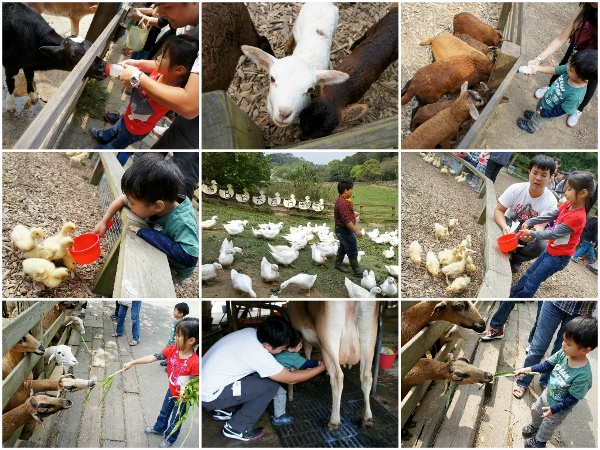 The kids loved interacting with and feeding the animals. Of course, they were initially a bit wary of the animals but eventually warmed up to them. There are free feeding sessions you can queue up for. The sessions are run very efficiently and the queues move quickly. You can also purchase grain and vegetables to feed the other animals. We fed calves, ducks, bunnies and goats, and even tried milking a cow.

There are a few playgrounds in Flying Cow Ranch and the kids had a lot of fun there in between. You can also sign up for DIY workshops to bake biscuits or cakes, make ice-cream, or even paint pottery. 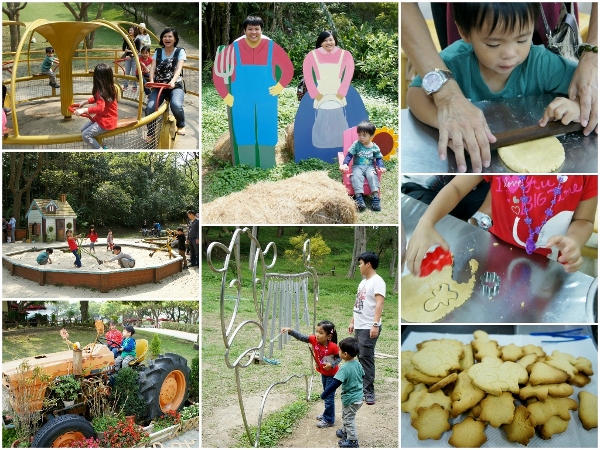 Another fun activity is visiting the small towns around the train stations along Pingxi Line. We stopped at Jingtong for a bit of a stroll and wrote some well-wishes on a piece of bamboo which we then hung up on the fence running alongside the railway track. We then took the train to Shifen. Handy tip: sit at the end of the train so the kids can see the landscape zooming by!

At Shifen, we released a sky lantern and the children were so excited to see the paper lantern floating up into the sky. There are hoardes of people at Shifen releasing sky lanterns at the same time and it's hard to take a nice photo without strangers appearing in the shot. A better option would be to do the sky lantern releasing at one of the less crowded train stations instead. 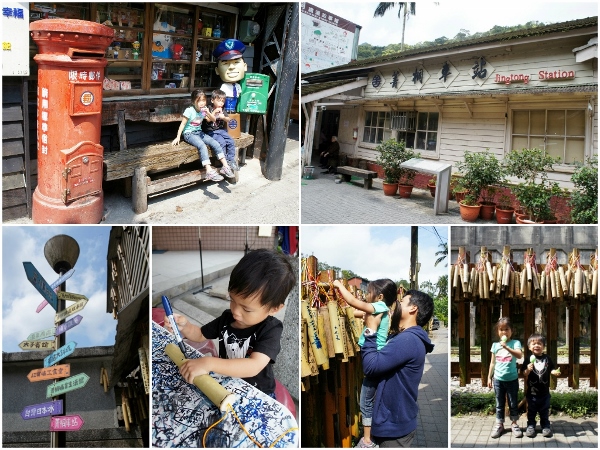 The small towns along the Pingxi Line are quaint and charming and certainly worth a visit. We got our driver to take us to Jingtong and then to pick us from Shifen but you can take a northbound train towards Ruifang Station from Taipei Main Station, then transfer to the Pingxi Line. 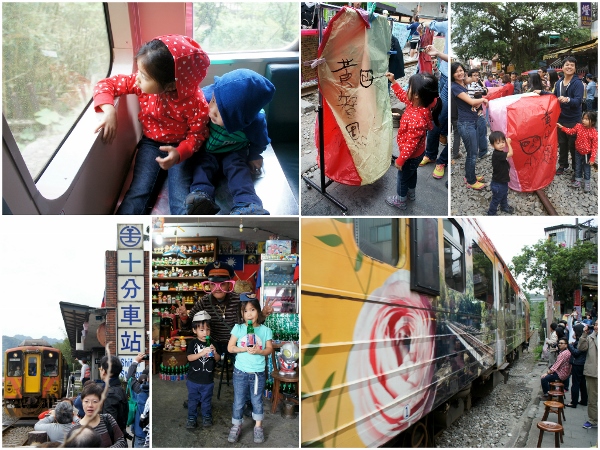 If you have kids that are 5 and above, a visit to Baby Boss is a must. Baby Boss is the equivalent of KidZania and kids get to try out different occupations there. Adam was too young to participate but Anya had such an awesome time.

She was a miner, a firefighter, a nurse, a gas pump attendant and she even worked at a space station control centre. The place is HUGE and the attention to detail is amazing. Kids will love the costumes, the equipment and the vehicles. 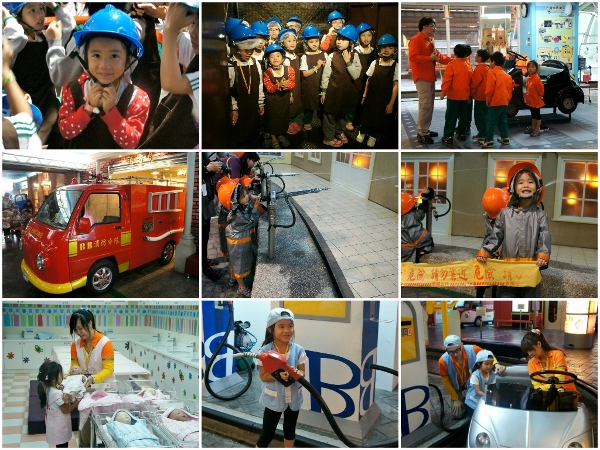 Some other fun and kid-friendly things to do in Taipei:

There is a special queue for the "Eyes of Maokong Gondola" crystal cabin (with a glass floor you can see right through!) and that queue moves more slowly. An ordinary cabin is good enough, especially if you're not sure whether your kids will be nervous in the crystal cabin. We had too many people for a crystal cabin but the kids enjoyed the gondola ride nonetheless.

Maokong Station is situated in the middle of tea plantations and there's food to be had near the station. If you walk further down away from the station, you can find cafes with a great view. 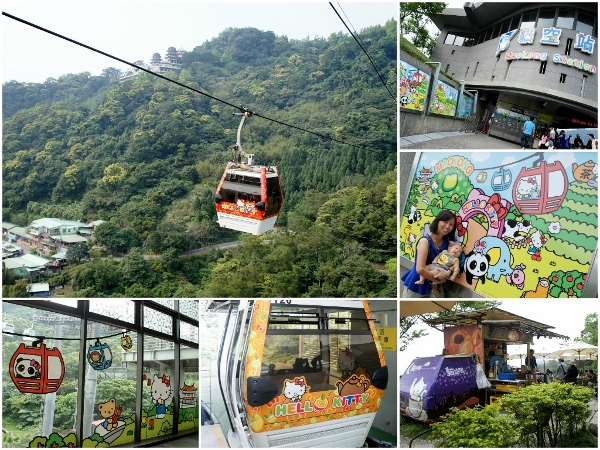 We visited Yangmingshan National Park to let the little ones run around a bit but they weren't particularly keen on the greenery and flowers and were infinitely more interested in watching a caterpillar crawl around on one of the terrapin's back. 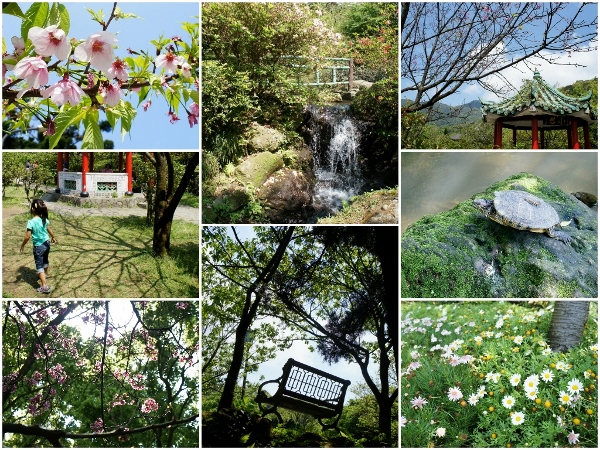 We ate non-stop and the kids loved the food! We had supper at Ah Zong Mian Xian, breakfast at Yonghe Dou Jiang and a myriad of things in between. We stayed at Ximending and there's a ridiculous amount of street food available. We walked and ate, then walked and ate some more. There's so much to eat in Taipei and even the fussiest child will find something she likes. 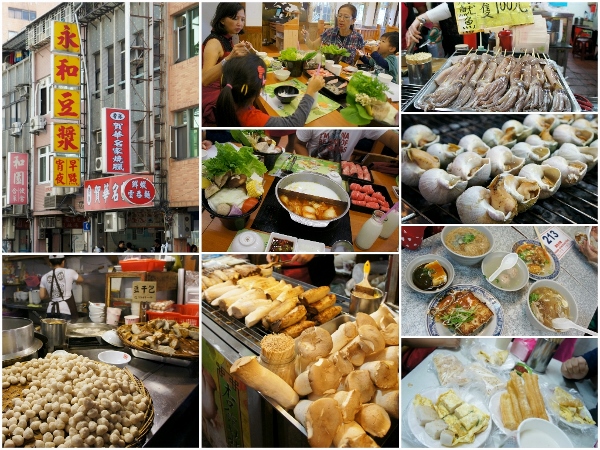 The night markets can be a wee bit crowded and overwhelming for kids, but we decided that we just had to check out one or two. The key is to keep the visit to the night market short and expect that you may have to pack some food back to hotel to enjoy! The kids liked the kiddy rides and Anya has fond memories of eating a fried Oreo. 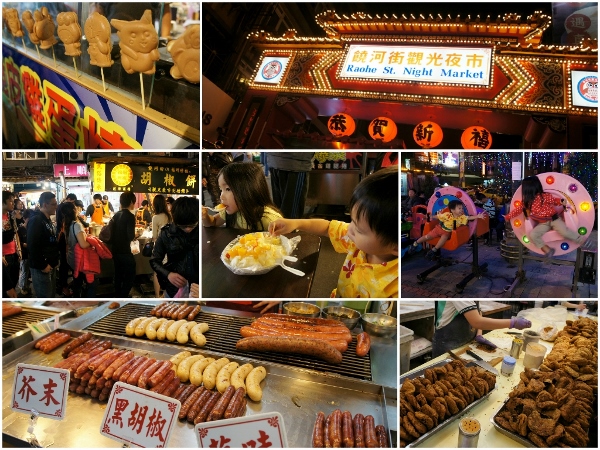 It's incredibly easy to get around in Taipei. You can hire a car and driver or take a taxi or the train. The streets and train stations are stroller-friendly but I wouldn't recommend bringing a stroller to the night markets. Unlike in Singapore, the people in Taipei don't use the lifts at the stations unless they are pushing strollers, dragging luggage or wheelchair-bound. There are usually people happy to give up their seat to you if you are carrying a baby or accompanied by small children.

You can find clean and well-equipped parent rooms in the train stations where you can change diapers, breastfeed or refill hot water. The rooms are locked so you will need to press the intercom button located by the side of the room. If you need to buy diapers, don't go to a Watson's. Look for a pharmacy/ drugstore. These are usually located in some random small lane and not along the busier streets and you can always ask a local to direct you to one.

Taipei is fun, accessible and affordable and there is really no reason not to bring your kids there. In fact, after Taipei, you will probably want to check out the rest of Taiwan with the little ones!
Posted by weehours at 23:58