This is a guest travel post contributed by Mommy Susan of A Juggling Mom. Susan is full-time working Mum who's passionate about living life to the fullest. In between juggling the many roles as a wife, daughter, sister, girlfriend and career woman, Susan enjoys exercising, crafting, scrap-booking and travelling round the world with her husband Alexis and dear daughter Sophie (6). They went to Gold Coast in July 2014. This Gold Coast holiday is suitable for families who love outdoor adventure and a little thrill on their holidays! 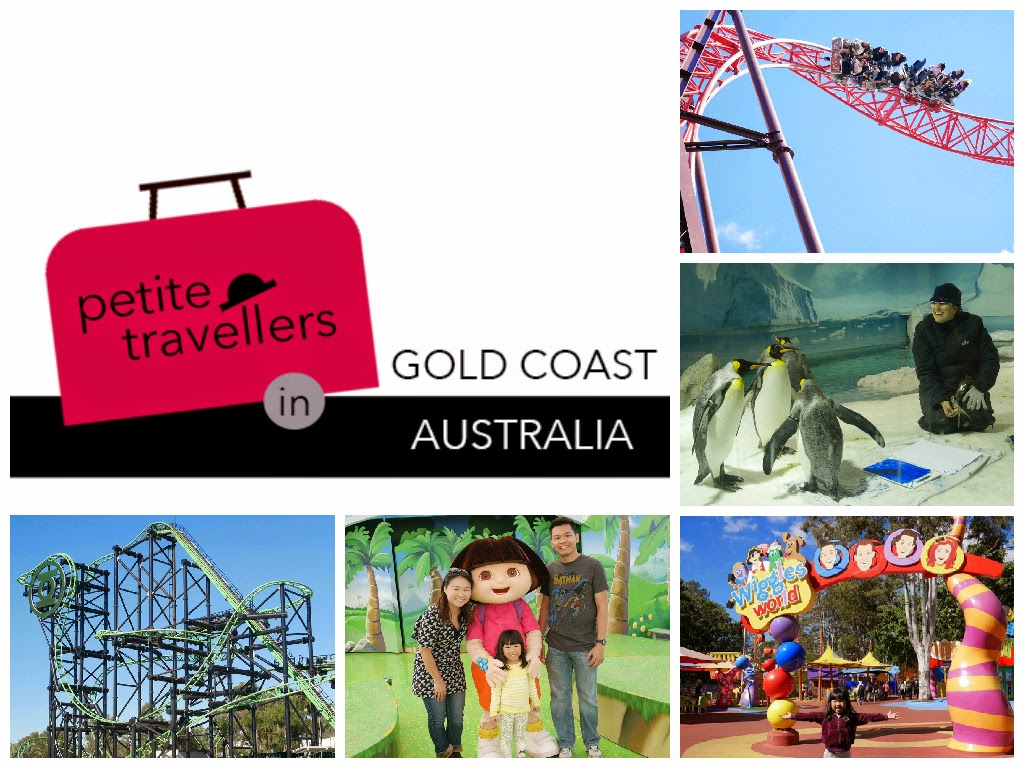 Mention Gold Coast and the sandy beaches of Surfers Paradise comes to mind. But beyond the sun, sand and sea, do you know that Gold Coast is also known as the theme park capital of Australia? We visited three theme parks, Dream World, Movie World and Sea World, with my five-year-old last year and she had a hard time deciding which one she liked best. And I totally understand her dilemma as each one offered a different experience. So here’s the low down on what you can expect.

Dream World is the largest theme park in Australia and is definitely the place to go for the most exhilarating rides. My hubby was so excited to take on their signature BIG 9 thrill rides which are the fastest, tallest and biggest rides in the country. Even though I’m usually a chicken when it comes to such rides, I gamely went on two, the Buzzsaw and Pandamonium and survived them. Just a little tip on the latter ride, it has two options for a crazy and not-so-crazy experience and I didn’t realise what I got myself into when I was spun up and down and round and round and was relieved that the person who puked on the ride was not me #truestory. The popular rides tend to have long snaking queues by mid-day, so it’s a good idea to plan your day to get the most of your visit. 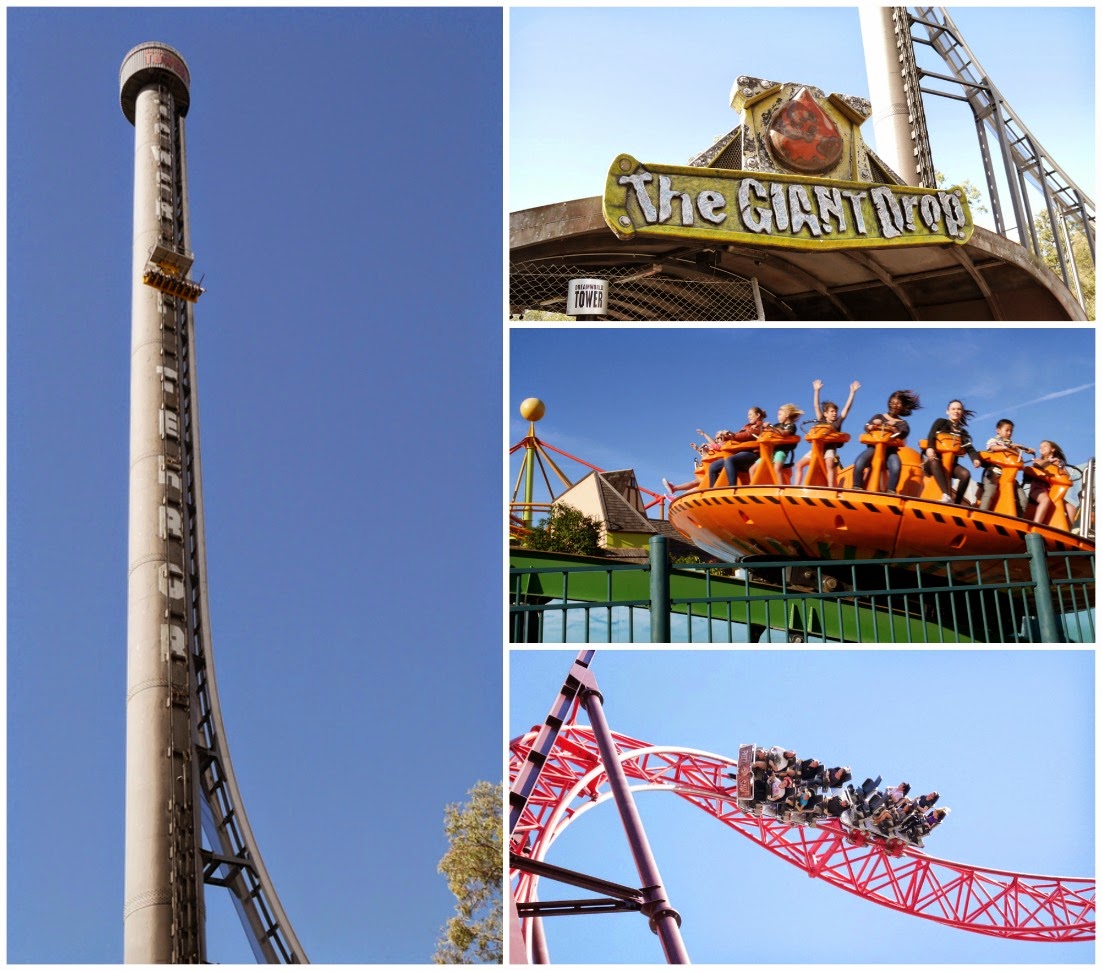 For the little ones, they’ll be thrilled in the colourful Wiggles World. Here they’ll be delighted with rides like the Big Red Boat Ride and the Big Red Car where they get to sing along to songs from the Wiggles while journeying into the Wiggles House. There are also play areas where they can just run and play like in this pirate ship. For a more fun way to get around the theme park, don’t forget to hop on the Dreamworld Express and go chugging away. 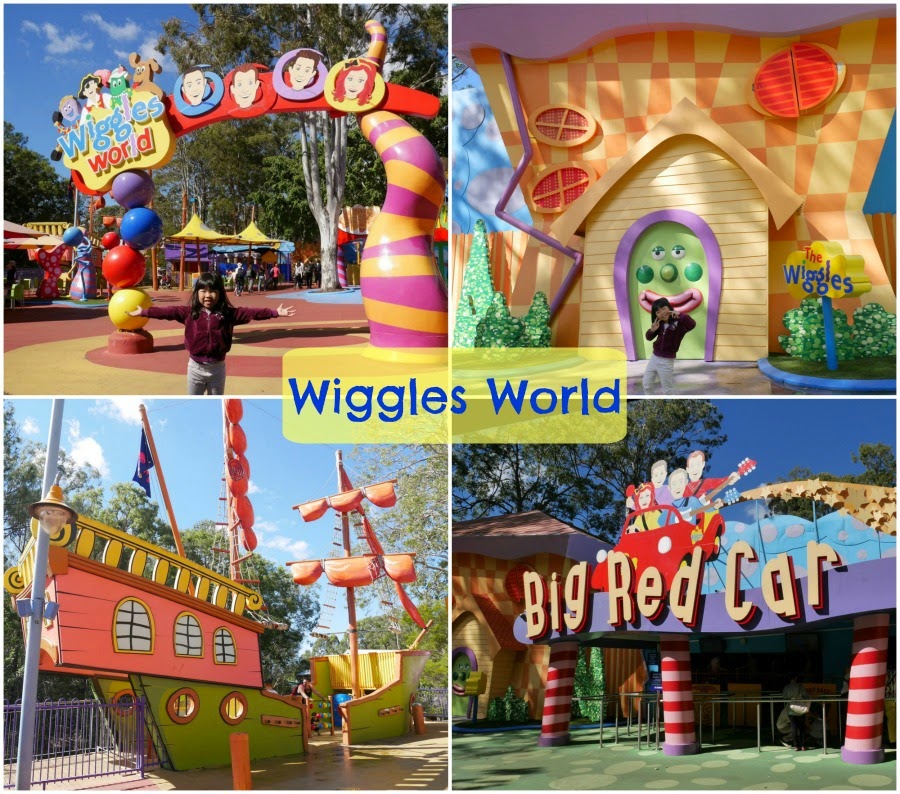 More fun awaits at the DreamWorks Zone with the characters from KungFu Panda, Madagascar and Shrek. We even spotted some of our favourite characters like Alex the Lion and Gloria the Hippo after the Madagascar live shows and snapped a photo with them. The height limit for the rides here tends to be higher and poor Sophie was turned away from some of them. But she was not entirely disappointed as she had a blast at King Julian’s Mad Jungle Jam, which is a 2-storey indoor playground. But judging from the rides that she still talks about, I would say that the bumper car and log ride were her favourite. So much so that she surprised me by taking them four times! 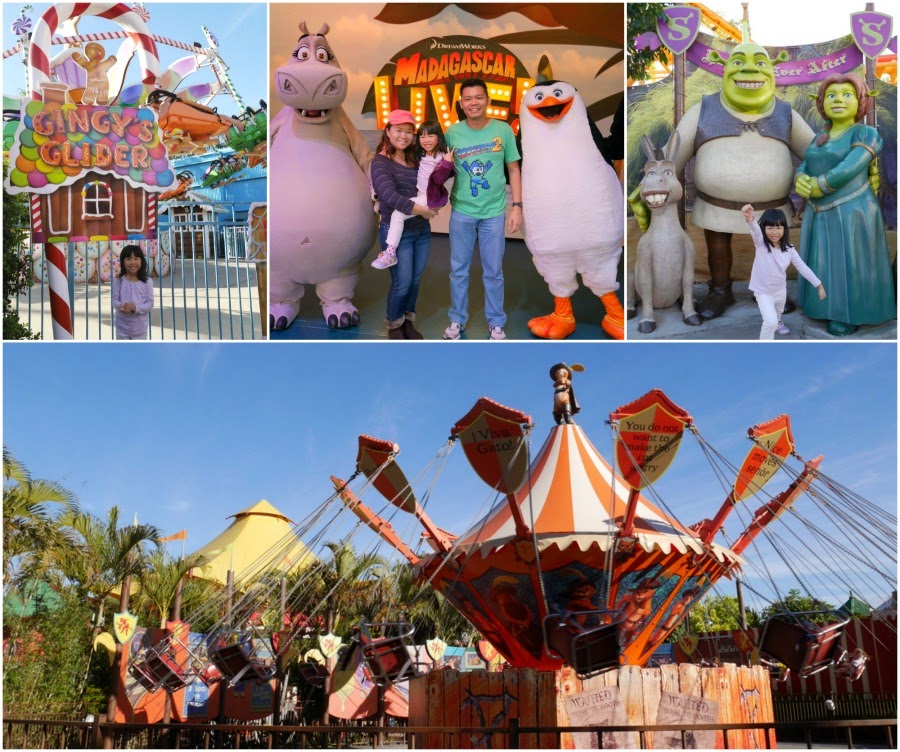 Within the park, there is also Tiger Island, which is the largest interactive tiger facility in the world, as well as the Dreamworld Corroboree which features over 400 Australian animals. We didn’t venture to these areas as we already went to see the wildlife at the Wildlife Currumbin Sanctuary. Since we were there during winter, we also skipped the Whitewater World which was just next door.
Do plan to spend a whole day at Dreamworld. With so many rides and sights, it truly is a family theme park that the whole family will enjoy.

One can’t come to the Gold Coast and not visit the Warner Brothers Movie World. Its main selling point is its movie-themed rides. While there are less thrill rides compared to Dreamworld, they don’t disappoint at all. I only took the Arkham Asylum and it ended before I could catch my heart that nearly leaped out. There’s also Superman Escape where you go from from 0-100km in 2 seconds! There is also the new Green Lantern Coaster and Justice League 3D ride just to name a few. 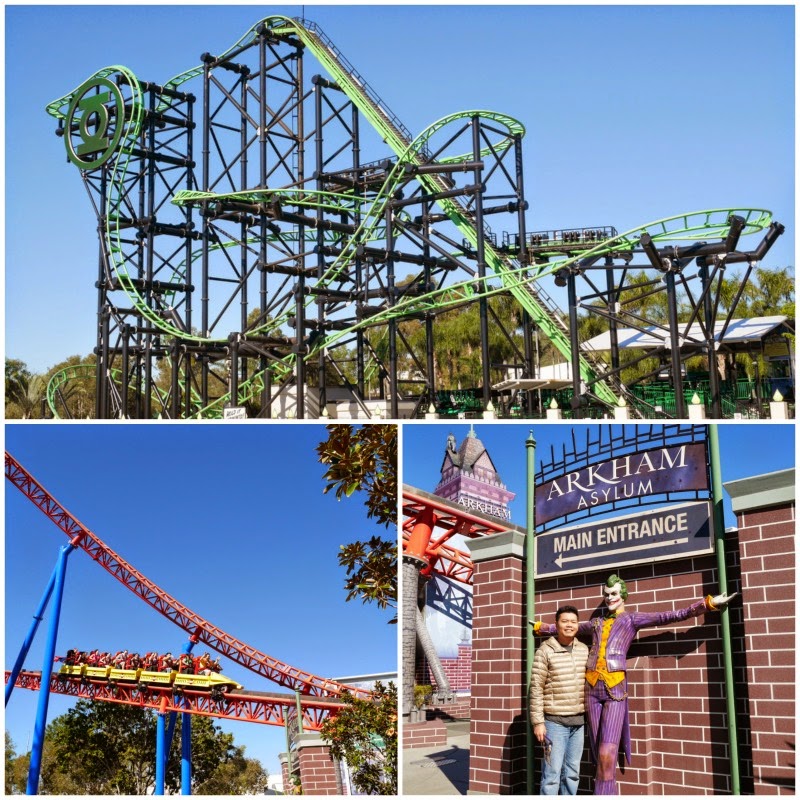 On the Main Street, you can spot mascots like the Looney Toon characters and the Superheroes like Batman in his Batmobile, Cat Woman, Super Girl and the Joker. Otherwise, you can choose to watch them all during the All Star Parade where they all make their appearance with lots of photo opportunities. So snag yourself a good seat along with the Main Street as we found out that you’ll see them twice as they go up and down the street. For the kids, there’s a Fun Zone with Looney Tune rides. But personally, I think the rides wouldn’t be too appealing for kids 7 and up. But at least Sophie had fun at the games stalls and even scored herself a Daffy Duck! 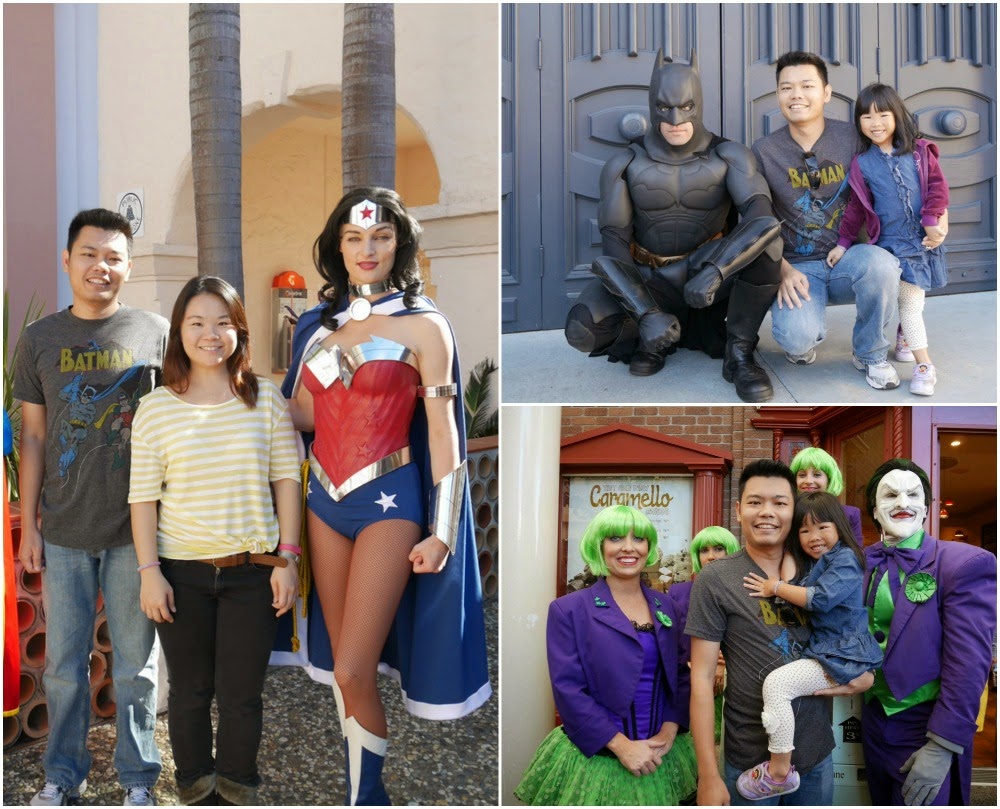 There are several performances that you can catch and one of them is the popular Hollywood Stunt Drive Show where you need to go earlier to get a good view. Everyone was wowed by the impressive stunts but the storyline was pretty predictable and could do with some livening up. Having less rides mean that the queues tend to be longer here at Movie World, so do be prepared to wait a little longer especially for the popular thrill rides. I felt that the theme park could have offered a more immersive experience since it has such a compelling theme with the superhero characters, so that was a little disappointing for me. But what made it magical for Sophie was when she zipped around in her Superman cape just like the superheroes she saw
.
Movie World
Pacific Motorway, Oxenford, Gold Coast, Queensland 4220
Opening Hours: Mon - Sun: 09:30–17:00

If there is one theme park that I’ll highly recommend to families, it would be Sea World because it scores in both the fun and educational quotient. Of course, I’m bias because Sophie gets to meet Dora the Explorer whom she adores the most. Plus a stay at the Sea World hotel just completes the whole experience at Sea World. 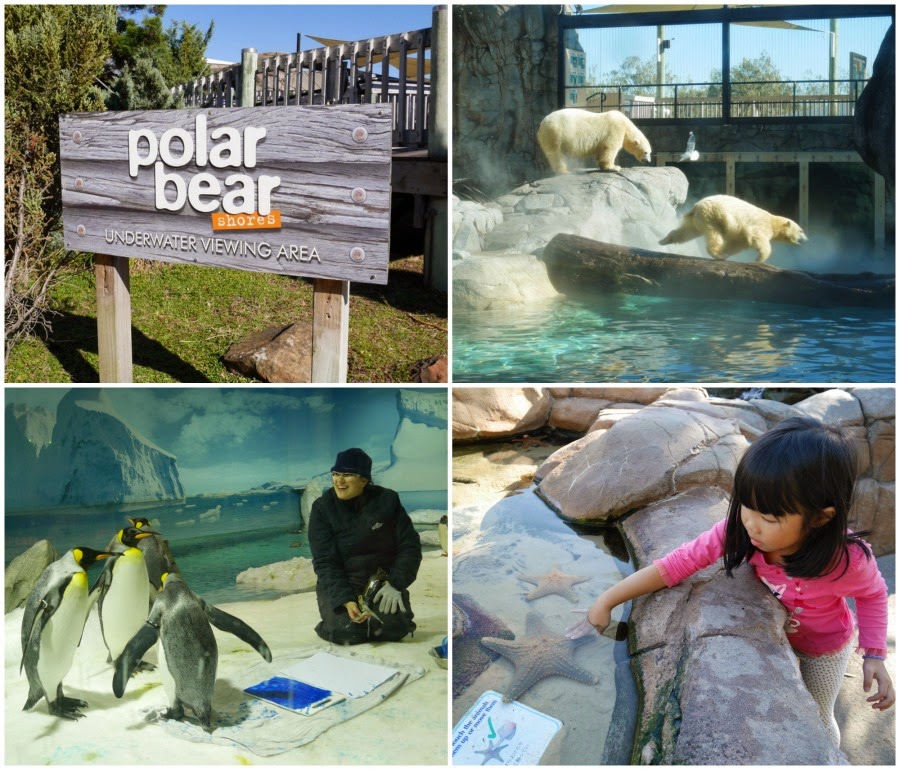 Being guests of the hotel, we had special privileges to meet some of the Nickelodeon characters at the hotel lobby before heading to the Sea World to see an exclusive dolphin training experience before the theme park opened its gate. Here the rides take a back seat and the animals take centre stage where you can spot polar bears, sharks, feeding of penguins, catch a dolphin show, and even sign up for experiences like reef snorkelling or interacting with seals which will be such a memorable highlight of the vacation. 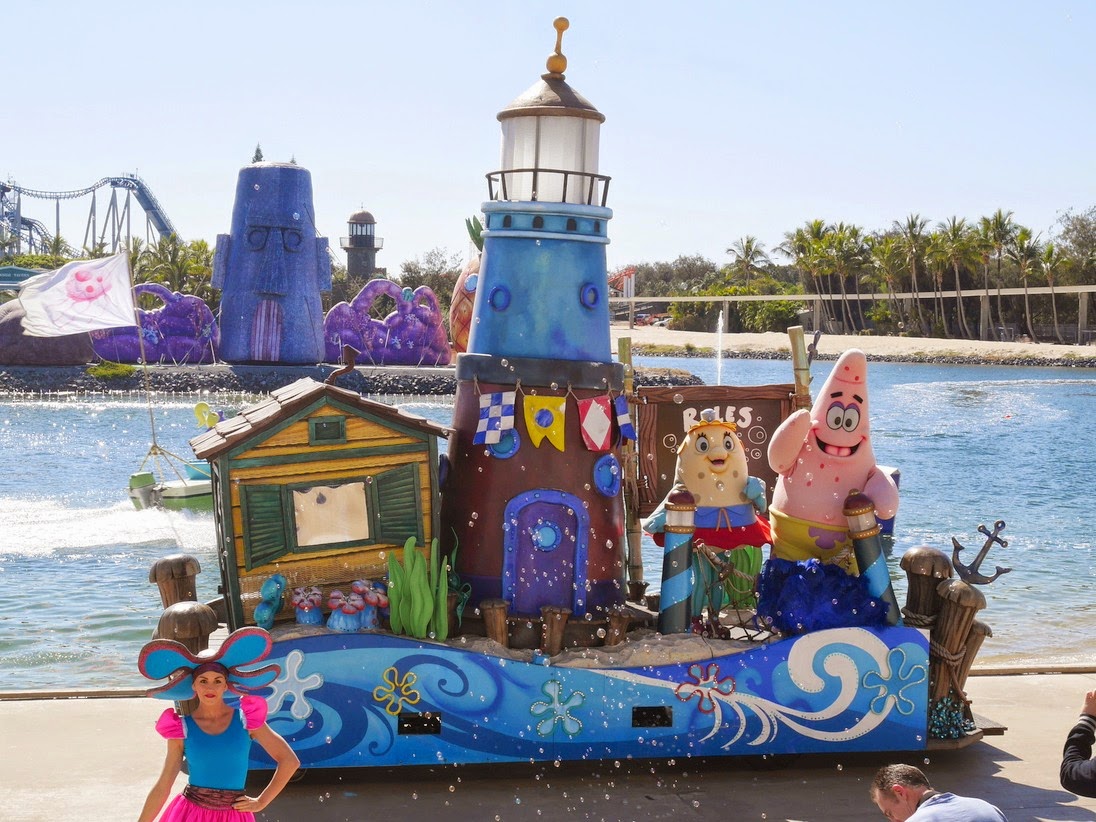 We enjoyed the various performances like the Dolphin show, Stunt Jet performance, humorous Pet Detective show and of course the Dora live show that my daughter really looked forward to. There was also a Spongebob Parade which we caught while having lunch. 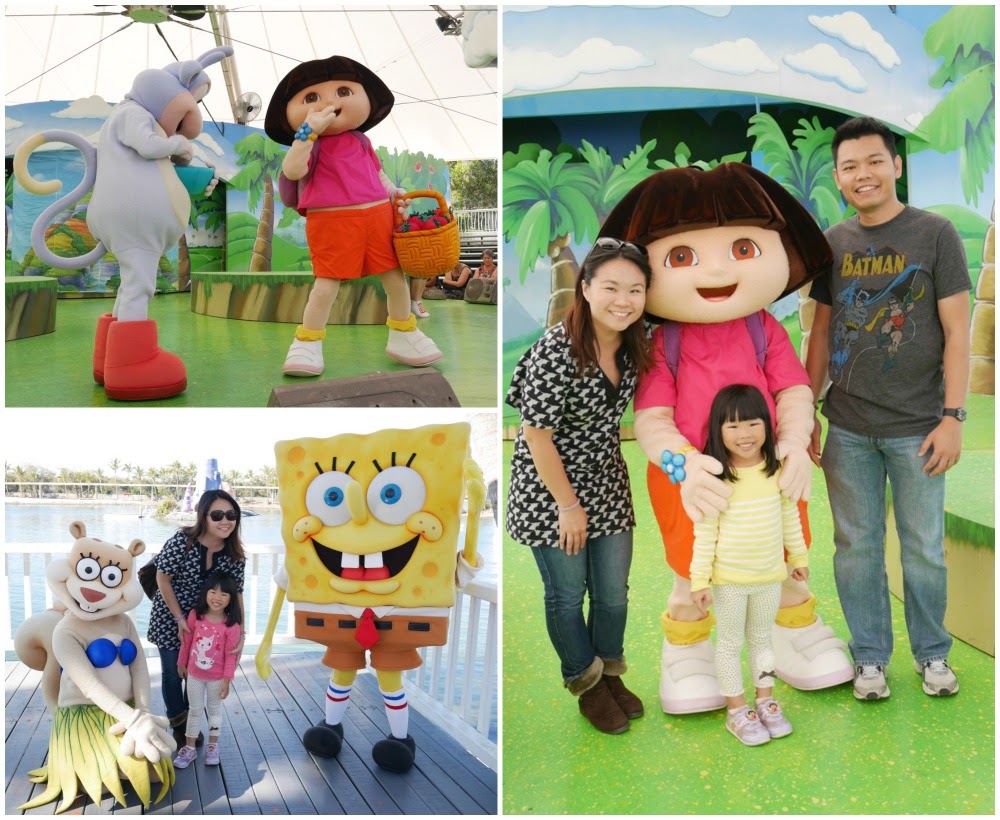 We ended the day at the Castaway Bay where it was fun, fun and more fun. Be prepared for lots of climbing and crawling up the Sky Fortress where kids and adults can maneuver up this 5-storey adventure playground. If you’re feeling extra adventurous, you may want to take on the Sky Climb high rope course that takes you a good 12 metres above the ground! But do book early as this tends to be the last stop for everyone and we missed the chance when we decided to try it.

To get more recommendations of other family-friendly attractions in Gold Coast, Australia, hop over to this post - Queensland for Kids!
Posted by Unknown at 12:44